Pepper is used throughout the world as a condiment. Piperine, the ingredient responsible for the pungency of pepper is being researched for its potential to improve the bioavailability of ingredients in supplements such as curcumin in turmeric.1

Black pepper (Piper nigrum) is a flowering vine of the family Piperaceae and is native to south India. It grows up to 4 metres (13 ft) in height on supporting trees, poles, or trellises. A spreading vine, it roots readily where trailing stems touch the ground. The leaves are alternate, 5 to 10 centimetres (2.0 to 3.9 in) long and 3 to 6 centimetres (1.2 to 2.4 in) across. The flowers are small, produced on pendulous spikes, which lengthen as the fruit matures. Black pepper is cultivated for its fruit, which is usually dried and used as a spice and known as a peppercorn.

Dried ground pepper has been used since antiquity both for its flavour and traditional use. It was found stuffed in the nostrils of Rameses II and used afterwards as part of the mummification process in ancient Egypt. It was known by the 4th century in Greece and was traded widely throughout the Roman empire. 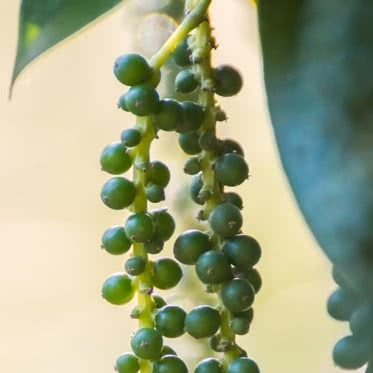