Clove oil is an essential oil derived from the clove plant, Syzgium aromaticum. The volatile oil, which contains around 85-90% eugenol is distilled from the unexpanded flower buds. It is particularly used as a constituent for many dental preparations.

Originally native to the Molucca Islands, clove is now grown in many tropical countries including Indonesia, Malaysia and Brazil. Clove (Eugenia caryophyllus) is an evergreen tree that belongs to the myrtle family (Myrtaceae). It can reach up to 12 to 15 meters in height.  It has shiny green, aromatic leaves. The flowers sit in terminal clusters on the tips of the branches. The flowers are bell-shaped and have red cups and white crowns. The fruit is a small berry that contains one or two seeds. Picked by hand in late summer and again in winter, the clove buds are dried until they turn brown. The buds are then left whole, ground into a spice or are steam-distilled to produce clove.

Chinese people have used clove for more than 2,000 years as a fragrance and spice. Cloves were brought to the Han dynasty of China from Indonesia as early as 200 BC. At that time, people would hold cloves in their mouths to freshen breath during audiences with their emperor. 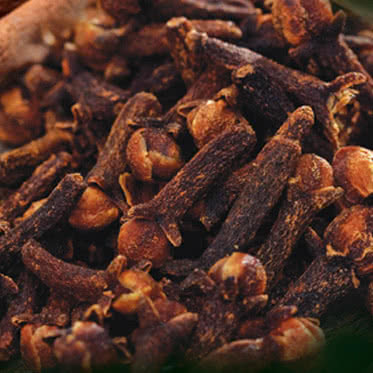