Ginkgo biloba, has been used for thousands of years and has been the subject of extensive modern research. It has been shown to support mental function by promoting cerebral 1,2 and peripheral circulation 3 (brain and vascular circulation which declines with age).

Ginkgo biloba (GK501®) has been found to help improve the performance of healthy young adults, particularly their ‘speed of attention’.4 Other research work5 in healthy middle-aged adults has also found that Ginkgo biloba GK501 may help to improve quality of memory over a 12-week period. It is thought that Ginkgo biloba may exert its effects by improving blood flow to the brain thanks to its flavonoid and anti-inflammatory effects.6

Commonly known simply as ginkgo, this ingredient is an extract of the ginkgo biloba leaf of the ginkgo biloba or maidenhair tree. The ginkgo tree belongs to the family Ginkgoaceae (genus ginkgo) and is the only living species in the Ginkgophyta division, with all other species being extinct. It is native to China and was cultivated in early human history. It is one of the oldest living species of tree. It is known as the “Tree of Knowledge” and is cultivated as a “temple tree” in East Asia. In fact, it can be mainly found in monasteries in the mountains where Buddhist monks have been cultivating this tree herb since 1100 AD. The Ginkgo biloba tree can reach a height of 30 to 40 meters and may live for up to 4,000 years. In ginkgo leaves there are two main groups of active substances; Flavonoids (ginkgo-flavones glycosides) & Terpenes (bilobalide and ginkgolides). Ginkgo biloba extract is made out of the leaves. The leaves are harvested mechanically.

Ginkgo has been used for thousands of years and help support memory health. 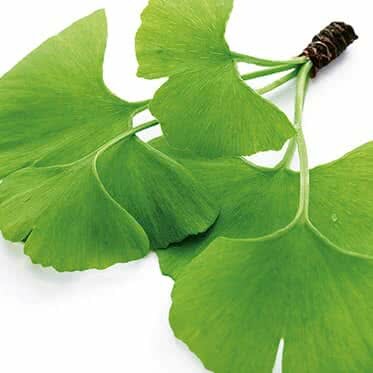