This is a gentle and effective herb for irritated states of the mucous membranes of the chest, urinary tract, stomach and intestines. Slippery Elm also causes reflux stimulation of nerve endings in the gastrointestinal tract leading to increased mucus secretion.

Slippery Elm is native to Central North America, thriving in moist uplands although Slippery Elm will also grow in intermediate soils.  Also known as Red Elm, Slippery Elm has other common names including red, grey elm, soft elm, moose elm and Indian elm. It is a medium sized deciduous tree with spreading branches, which grows to a height of 12-19 metres. The broad oblong leaves are 10-20cm long, rough on the top and velvety below. They are tinged red in the spring, green in the summer and yellow in the autumn. The flowers are produced before the leaves and appear in clusters of 10-20. The inner bark occurs in flat, oblong pieces, about 2-4mm brown in colour while the inner surface is paler and finely ridged.

For centuries, the inner bark of the slippery elm has been used in North America as a herb in a variety of health remedies. Sometimes the leaves are ground into a powder and made into a tea. 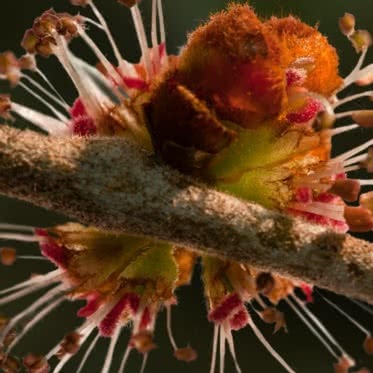